Everything I've ever done, writing books, creating coloring books, starting blogging, making art, coaching and consulting people is because I wanted to.

Every day I get up doing what I want to do, however, I want to do it even if other people think I've lost my mind a bit and murmur "how does she do it all?". I love self-discipline but I don't like routine, switching things up helps me fuel my joymeter and live life however I want.

Step on your path with curiosity and see what adventures you can have with the resources and programs below so you can clarify your direction, and set goals on the path you forge by your own design.

Explore below the free resources, and check out the offers to get you unstuck right now.

Get clear on your goals Problem-Solving Session

Coffee with a Rebel Podcast Episode 11: The stories we tell ourselves

Episode 11: The stories we tell ourselves

Coffee with a Rebel Podcast

You can also subscribe via the following podcast player!

In this episode, you'll learn:

Want to Sponsor an Episode?

Submit 30-second audio with your name, what you do, and where people can find you OR you send me a script and I read it on the podcast!

It's another podcast, me walking to my perfectly healthy body, whatever that means. I'm out here walking, which I love to do, I like being on the trails. Once again, I had to start to share with you. I'm talking about the stories that we tell ourselves that have followed us. Since birth, probably right, no matter what your background is, we all have stories, whether they originated from your family, within your culture, what that heritage, or whatever that may be.

Kindergarten to, but elementary school and middle school, and then high school, even into adulthood, we have all these stories that have a tendency to hold us back because we believe them. Right?

When I was about eight, I mean, it's probably happened between ages six to 12, just as a reference that I was in my foster family, for that time period. And while it wasn't the most horrible life, because we got to do things, go on vacation, and have pretty much everything, it was sort of middle class, I suppose. It was also really, really hard.

Aside from the trauma that I experienced, nobody decided that maybe a therapist would be a great idea. It was also really, really hard because of the abuse tactics that they've had. And specifically, I would come home from school and would find all of my stuff, my clothes, my belongings, like everything on the floor, and my foster mother specifically, berating me about how messy and how unorganized I am. And I really wasn't I don't think I don't recall. But she went on about how I would never succeed, I would never be anything, I'm worthless. I will be just like my parents, right, my dad was an alcoholic, and my mom just couldn't get it together for whatever her reasons.

So she would just berate me and that stuck with me when I was eight. That was my biggest recollection at that age when that happened. And I know what happened through all the six years I was with them. So that story stuck with me. And then when I ended up going to a new foster home because my foster family didn't want me anymore because I was a bad influence and separated me from my brother. Again, instead of getting me help and support that I needed through a therapist they rather, you know, send me off, rehome me or whatever you want to call it.

And it was during that time where I had a shift in personality in how I showed up in the world. I used to be very goody two shoes, and music lessons, dance lessons and all that kind of stuff to stay busy and was just good. I became a teenager and then that's how I became the not-so-good to hang out with cause of sex, drugs, and rock and roll all of that.

So the stories that they've told me stuck with me. So yeah, I started drinking. And so I'm doing weed well more I like hash because Europe is different, and just not giving a damn about any fucking thing. And I was really, really angry at the world, and my parents angry, at the system. And it showed my behavior and you know, I skipped school. And I ran away multiple times. And always playing into the story. Why bother?

It's not like I'm ever going to be successful. Nobody gives a damn about me. Nobody loves me. I'm unlovable, I'm not worth it. I don't deserve anything. There's something so freakin wrong with me. This is why I'm in foster care in the first place. Like it's all me it was all my fault in some kind of a way. And then, one day I was failing high school, miserably, I didn't need to but did it anyway because an angry teenager, my social worker in the group home, put me aside and looked at me, and we had a talk.

She's like Petra, you know, you're not stupid. Like, I know you're not stupid, I know you have what it takes to, to make something out of your life. And you have a choice to make, you can choose to continue on the path that you're in just fail, and probably die at some point. The situation I was putting myself in were not safe for a teenage girl in a big city like Frankfurt. Or I could shift gears a little, adjust my mindset, maybe, and start putting in the work so that I could have the career that I wanted, and just have a great life.

And that stuck with me because, for the first time in my 15 years, not a single soul has ever said those words to me. And I wasn't shocked maybe and in disbelief. But it's sort of like my starting point in somehow knowing that I know, there's a better way to do this life. I just couldn't figure it out. I didn't know how and how the heck was I supposed to know that at 15 is beyond me.

So every time I faced a situation where I doubted myself, and I didn't feel good, and I just you know, didn't have the confidence, instead of making excuses and telling myself these stories, I remember this conversation with my social worker. She believed in me, so there's no reason I can't believe in myself.

Being able to share my experiences with people, and I guess, in some weird way, become a role model and a thought leader, although I question that a lot. And then I remember the conversation.

So in that year, I ended up graduating high school as one of the top 10 students as one of the best grades across the board. And I was feeling like it was really at the beginning of the year. So I'm sharing this with you because I know we all make these stories up about different things and I want you to look at them.

You have a project, a goal, something that you're trying to achieve. And you're not getting anywhere. Look at the stories you're telling yourself, about yourself. And why you can't do that. Why Why can you not do that? I know that I can do anything I want to except me like strongman competition because I'm not training for it.

Right? So obviously, within reason. But I can do pretty much anything else that I want. So think about that. And maybe give it a think, write down the stories.

I'm a big fan of writing things down because then it just becomes, I guess real but also more concrete because we can do something about it. When it's real and concrete we know we can do something about. So if you're writing down your story, look at how the evidence is that's not accurate. And think about all the things that you achieved and conquered and decide that that story is no longer true.

I am not a foster kid, and I know this to be true. I am turning 48 this year, I have raised my children. I'm still supporting my youngest who is on the spectrum and has challenges that we're working through. I've got a business selling well art, like success is in the eye of the beholder. If I find that success that's what that means to me. It's not always about the money as much as people really want to make it. So success does not equal money can equal being a thing as that was the case for me. 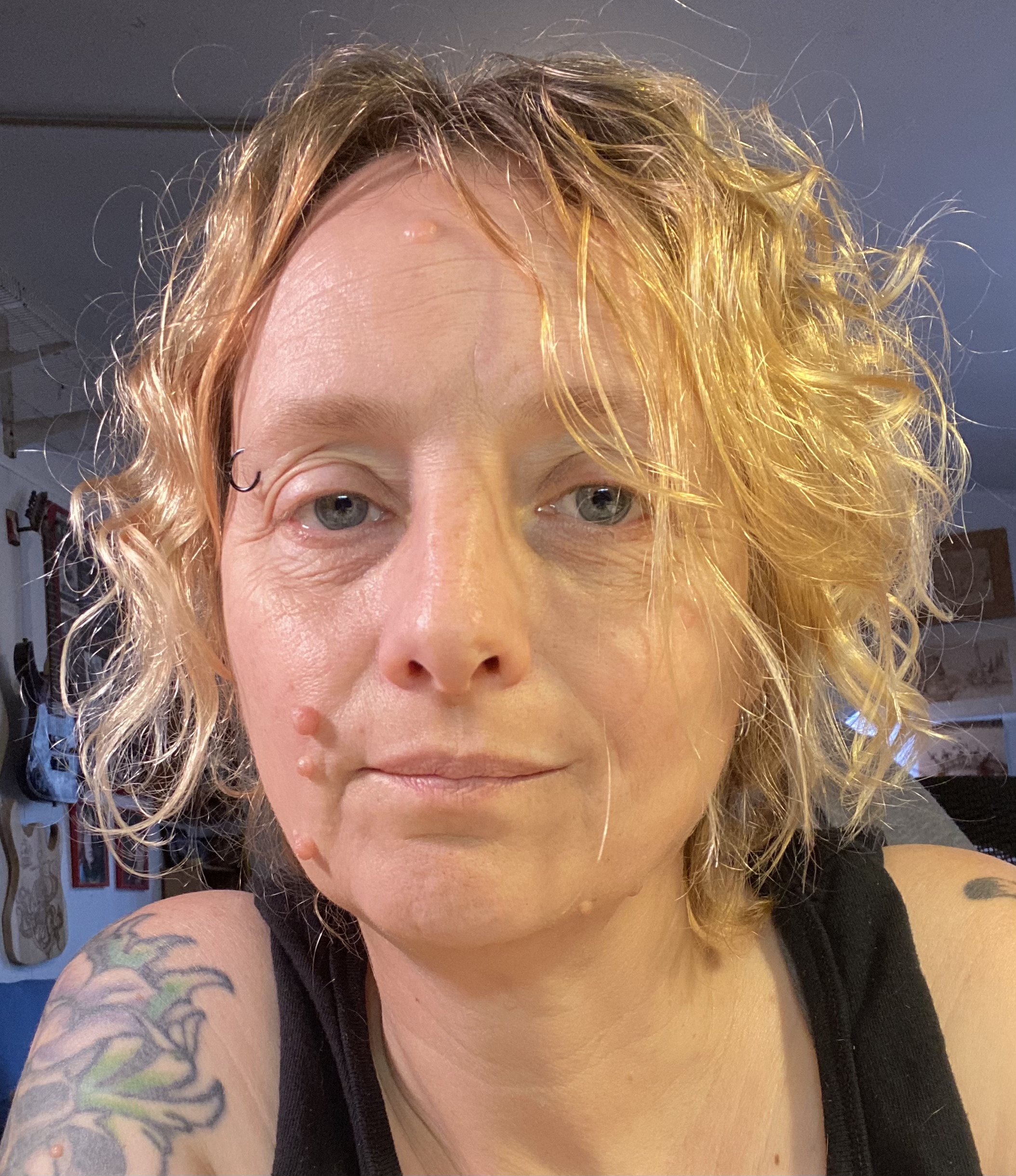 Goal Mindset Mentor helping creatives, multi-passionates and rebels transform their mindset, strategies, and habits so they can go from confusion to clarity and fill their lives with love, joy, and productivity!

Petra Monaco is a published author, goal success coach, and mom and breaks the status quo for fun. As a foster kid, she knows the challenges and excuses people make she worked her way through to become a Master's level therapist.

However, after watching her son fight for his life due to a rare genetic disorder and three liver transplants, she now coaches creatives and multi-passionates to stop waiting for one day and the perfect moment’ to start creating the life they want now.

Petra helps you dive deeply into the heart of things in order to discover your next steps, and inspires you to set up your own personal framework so you can break free from fear, doubt, and, overwhelm.

Coffee with a Rebel is Petra bringing her shenanigans to the podcasting world. Just what is this podcast about - anything and everything - it's a journey, like many things on its path of unfolding where there will be talk about personal development, business matters, creating things, family, and well life in general. But mostly it's just sharing what is on my heart and mind and hoping that someone needs to hear what I have to say.

Enter your email address and we will send you a link to reset your password.